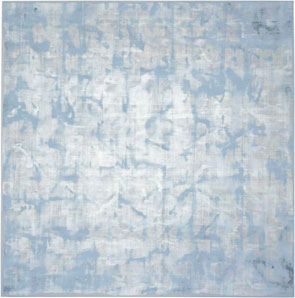 Two arrived not long after I sat down this morning, and one more has come in since I began writing. They waft into view in the bottom-right corner of my computer screen whenever a new email arrives, little grey rectangles containing the name of a sender and a few tempting words of text. Each one hangs there for a few seconds, waiting to be clicked open, before it fades back into the screen.

It’s a deviously seductive system for distracting you from whatever you are doing. Seductive because of the floating thinness of the graphic, the way it invites you to coax it into full view with one click of the cursor. Devious because there’s a kind of flattery in it—as if to say, you are so busy, so connected, so wired in, that you must see each message right now. Of course, you’re free to leave the messages unread, but only on the condition you agree to watch them piling up.

Since the thing I’m here to write about is a group of new paintings by Geoff Thornley, the obvious thing to do at this moment would be to contrast my screen and its instant electronic demands with Thornley’s serene and unhurried surfaces. That is how abstract painting is often described these days: as a space of refuge from the frantic wider world, a retreat for frazzled souls out on the quiet edge of culture. The problem with this explanation is that it treats Thornley’s paintings apologetically, as a kind of day-spa for the senses—pleasant but purely optional, and a long way from the grit of the everyday. And in my experience Thornley’s paintings feel anything but optional. Quiet and unrushed, certainly, yet for me also some of the most urgent and demanding artworks to be encountered in New Zealand right now not soft respites from the information age, but hard-won responses to it. As an artist with a special talent for hints, layers and transparencies, Thornley might even find something to admire in the calculating seductiveness of those on-screen alerts. No other local painter works so hard or subtly to capture our time.

It feels right to be thinking about Thornley here in the morning, because his new paintings are especially attuned to the early hours of the day. There’s a clue in the subtitle ‘Birds chatter’ that accompanies some of these paintings, a phrase that points, unusually for Thornley, to a source in the artist’s personal experience, when he woke one morning several years ago and found himself listening—as opposed to merely overhearing—the dawn chorus. In Thornley’s words it was the ‘uncomposedness’ of those sounds that attracted him, and we might see in the new paintings a visual echo of that experience, with Thornley’s stray and falling lines evoking the birds’ uncomposed music— the hop and flutter of their notes. But in the end this is too literal and limiting. The main reason for the daybreak idea lies somewhere else.

To make paintings about morning is to make paintings about light, and Thornley’s great talent as a painter is for letting light through. By his own reckoning he was decisively formed as a painter by early exercises with watercolour, lifting fluid colour away from the page so that the whiteness of the paper could do its work. That experience is wonderfully amplified in his Albus paintings of the 1970s, with their squeezings and sievings of light. And his new works, more than any made in the intervening three decades, circle back to those early works. A new system for mounting the smaller canvases—thin boards softly wrapped—makes them hover on the wall like floatmounted watercolours. Inside the paintings, light thickens and thins, breathes in and out, seems to rise and settle through vestigial grids.

If the paintings do evoke a morning, it is a very good one— open, expansive, even uplifting—and I suppose someone uncharitable might object that mornings are seldom really this way, that Thornley omits the bad hair, burned toast and gridlocked traffic that mark that time of day. But to raise that objection is to point to the very thing that makes Thornley unusual and cherishable in New Zealand art, namely the intensely lyrical spirit of his recent work—a spirit that’s nowhere clearer for me than in his strange new greens and purples, colours so high and bright they nearly bounce free of the brushstrokes that contain them. From the live quality of these colours to the patient layering of his surfaces, Thornley is an artist of lightness, openness and vulnerability, and in that sense nearer in spirit to the extraordinary watercolourists Joanna Paul and Rita Angus than to many of the abstract painters he’s aligned with in standard critical accounts. Closely engaged with Eastern traditions of painting on paper, all three value the light touch more than the grandiose gesture, and insist on the seriousness, even the profundity, of undramatic emotional states like curiosity, equanimity, and delight.

In poetry, to write lyrically is to write intensely and generously about your own present-tense experience. A lyric poem tells us not how things are, but how the poet feels about them. And the best lyric poets do this so well that the way they feel about things seems to be the way things are for their readers too. Inside merges with outside, and we see the world in the image of their response to it. The great problem occurs when the speaker’s responses start to obscure rather than illuminate the world. Rather than opening an experience up for the reader, the poet falls in love with the sound of his own voice. The same problem occurs in art. Whether it’s the hazily evoked nude, the blowsy abstract, or the blandly ‘joyous’ still-life, we can all picture paintings somehow stuck in this lyrical trap— artworks that advertise some idea of ‘emotional response’ while offering nothing for a viewer to participate in. So the question for Thornley is this: How do you make a painting intimate but not cloying? How do you draw people in without turning them off? How do you make the lyric feeling large enough for other people to feel at home in it?

The answer, with Thornley, is a kind of seductive reserve. Whether it’s the grids that don’t quite materialise, or the lines that drift away from themselves like calligraphy written in water, his surfaces seem always to be confiding something that never fully rises into view. It might seem odd to put ‘seductive’ and ‘reserve’ in the same sentence, because a quick look at the contemporary mediascape suggests that reserve is a profound turn-off. By the standards of celebrity culture and the six-o’clock news, the reserved person is immediately under suspicion for keeping warmth and conviviality to themselves. Politicians routinely plummet in popularity if seen to be insufficiently warm and keen on sharing; audiences clearly feel they are owed some revelations. Luckily the world of Thornley’s art runs on completely different rules. Withholding and delaying are among the main methods he uses to intensify the painting’s appeal. With their layers and veils, their many moments of dissolution and delay, the paintings are always insisting that you come closer and dwell longer.

In other words, Thornley maximises the thing that makes painting so exotic in the age of the computer screen: the fact that it is stubbornly one surface. For a start, the paintings are fiercely anti-photographic, full of fine gradings of tone that simply sink from view in reproduction. Even more importantly, the paintings refuse to be held in memory. There are no bold images to carry in the mind, no governing geometrical patterns, just fields of small events that are as enveloping and changeable as weather. Look away for a moment and they seem to change character, like landscapes under changing light. What Thornley wants, I think, is a kind of painting in which nothing is abbreviated, truncated or assumed, in which we have to be completely there in the experience. And this above all is what makes the paintings lyrical, the way they only come alive— and in a sense only come into being—in that here-and-now, real-time, and very intimate encounter.

Lightness and morning have been key terms for Thornley at both ends of his forty year career. Albus, the title of his series from the mid-seventies, is Latin for ‘white’. And a large group of his recent works were initially titled ‘alba linea’, meaning ‘white line’. In Spanish ‘alba’ also means dawn, and that sense of the word leads us in turn to the form of lyric poem known as an aubade, in which the speaker urgently implores a lover to wake up and take in the day. Thornley’s new paintings are a painter’s variations on the aubade—morning lyrics addressed not to one particular lover but to whoever comes close to the painting. I’m not saying that the paintings are ‘about’ one particular morning; Thornley after all has spent his whole career opposing the idea that a painting is straightforwardly ‘about’ anything. Rather I think the morning with its bird chatter serves Thornley as a metaphor for painting—for painting as a state somewhere between waking and dreaming, habit and change, self and other, where we find ourselves a little lighter, a little less composed, and a little more aware than during ‘business hours’. We are a long way here from my emailed early-morning messages, but then again not so far: these paintings of Thornley’s are slow alerts, calling us to a different kind of attention.

This brings us to one final deviation from art’s familiar schedules. As a rule, we assume that an artist’s vision will get darker as he or she gets older, their thoughts moving inexorably towards the end of the day. But Thornley with his morning paintings calmly dissolves that assumption. Wake up, the paintings seem to say. It’s light.